Today I found out that Naval Air Station Adak has been closed since 1997. Of all the places I have been in my life, Adak Alaska stands out in my memory as one of the most starkly remote communities I have ever visited. It wasn't my idea to go there but when I was something interesting happened.

In December of 1979 I was a lowly U.S. Coast Guard seaman apprentice on a buoy tender stationed out of Kodiak Alaska. As a corn fed midwesterner born and raised, Kodiak Alaska was culture shock enough, but not a month out of boot camp and six months out of high school, I found myself sailing along the Aleutian Islands heading to the furthest most western point of the United States on a forty year old 180 foot buoy tender. 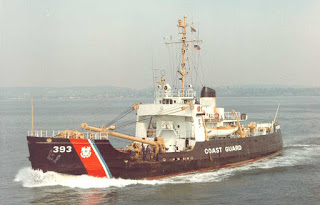 A buoy tender's primary function is to service and maintain a variety of aid to navigation (ATON) equipment such as buoys and shoreline mounted lighted day boards. There were batteries to swap out, light bulbs to replace, anchor chain to repair, barnacles to scrape. On this particular tour we were assigned to work navigational aids from Kodiak to Adak with stops along the way to such exotic ports as Dutch Harbor, Cold Bay and Unalaska.


We would reach as far as the island of Adak Alaska only about 140 nautical miles (about 160mi) from the International Date Line, longitude 180⁰, the line that defines where today ends and tomorrow begins.

It was, despite my assessment at the time that I had made a grave error in joining the Coast Guard, an incredible journey.  Ferocious work conditions, constant exposure to the elements during the day and long cold nights on watch overwhelmed any sense of adventure I could have mustered at the time. Still, the Aleutian Islands are a magical place containing isolated pockets of communities, World War II relics, active volcanoes, and sea life of every possible variety. By the way, you cannot imagine the smell of a beach full of walruses.

After our final buoy was serviced and dropped we made port at Naval Air Station Adak. Our bone weary crew, having spent several weeks at sea working in the harshest conditions was granted a few days rest at the air station before heading home. We came into port, doubled up all lines on our very dirty and beaten ship, and looked forward to the first cold beer we'd had in weeks.

Then, the Russians decided to invade Afghanistan.

History records the day as December 25th, 1979 but I honestly feel like that date is wrong and believe it was December of 1980.  First, my recollection was that Ronald Reagan was in office, adding to my sense of anxiety that this event would not go unchallenged and secondly because this was not my first long operation at sea and would have only been on board a few weeks prior to this patrol. But the mind plays tricks as you get older, and the internet claims my memory is faulty. Who am I to argue with history?  I do however remember the first evening, when the news came out, quite vividly.

Myself and a few shipmates on liberty immediately hit the EM club for much needed libation and then decided to take in a movie.  We didn't care what they were showing, but as it happens I remember exactly what it was, "The Changeling" starring George C. Scott in one of his final roles (strangely in another instance of historic facts not coinciding with my memory, this movie is IMdb listed as being released in March of 1980, not December 1979). It was damn good movie too until it suddenly stopped, almost nearly at the end, and the house lights unceremoniously came on.  A voice over the PA system simply said, "All service members report to your duty stations".  Confused, since we had no duty station on the island, being a little out of our element, we eventually deduced we had better get back to the ship. Along the way rumors were already flying around. Sailors passing each other exchanged what they knew but nothing was clear.  The only thing we heard consistently were two words, "Russians" and "invasion".  Being only a few hundred miles from the Russian coast we knew the situation was serious. We half expected a pallet of grey paint to be waiting for us on the pier since in wartime, the Coast Guard immediately assimilates into the regular navy.  Adak Naval Air Station was first line of defense during the Cold War and we knew if things went from cold to hot between the U.S. and the U.S.S.R. Adak would be first to know. Great, we would be on the frontlines of a war with a boat whose biggest weapon was a boom crane made for pulling 10,000 pound concrete anchors out of the ocean.

Of course, there was no altercation and we did return to Kodiak in one piece, but the incident will always remain in my mind.  Of Adak itself, I remember very little. What started me down this memory hole was an article I ran across from a photojournalist who had recently been there. I had assumed Adak was still an active military base but shouldn't have been surprised it was closed not long after the collapse of the Soviet Union.  Ben Huff has some great photos and talks a bit about the local community there still trying to eak out an existence on one of the most remote places on the planet. http://www.huffphoto.com/adak/  Check it out!

P.S. For those familiar with ocean travel and the International dateline?  Yes, our captain did make us spend two days sailing west of Adak to the 180⁰ just to claim being a Golden Dragon.